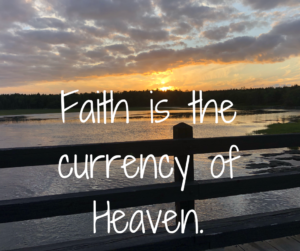 Anytime the keys to my vehicle have come up missing, I have engaged in a mission to seek and find.  Seeking was an action employed until the keys were found.  My children will at times go to look for their shoes at my request and come back saying, “I couldn’t find them.”  Supposedly they gave it their best shot, but they were ready to give up the search.  No, I sought to find.  One, because if I don’t find them, I’m not going anywhere.  Second, I know they are here somewhere.  The vehicle is in the driveway.  It didn’t get there by pushing it, I drove it.  So, I launch into seeking by faith, knowing I will find them no matter how long it takes.

Hebrews 11:6 says that “without faith, it is impossible to please God.  For they that come to Him, must first believe that He is, and that He is a rewarder of those who diligently seek Him.”  Understanding a little of the nature of God, we realize that finding Him is a reward in and of itself.  He is our all in all.  However, He has a way of doing above and beyond all that we ask or think according to the power that works within us.  Faith is seeking God.  It’s a seek and find mission much like the keys illustration because we know that He is.

There’s no amount of money or good works that will buy what you want/need from God. Jesus paid it for you. Faith alone pleases God and brings a reward as we seek Him who paid the price for us. Faith seeks God on the basis that He is and that the Way to Him has been paid. We aren’t rewarded for trying to earn something from God. We are rewarded for using what God gives us – faith. (Hebrews 11:6; Romans 12:3; Matthew 25:14-30)

Throughout the Bible we see the effects of people who sought the Lord.  Verses like Jeremiah 29:13, “You will seek Me and find Me when you search for Me with all your heart,” compel us to go after God with all we’ve got.  The faith to seek God knowing we will find, please, and be rewarded by Him is literally given to us (Romans 12:3).  The faith is given and we can grow it by using it.  However, it’s the condition of our hearts that have to be examined.  The condition of our hearts will either muddy the river flowing from our innermost being or clarify it.  It’s a hard heart that we have to fight against.  Past hurts, disappointments, discouragements, and offense are just a few things that can muddy the water if we are not diligent to watch over our hearts, which is the well spring of life (Proverbs 3:24).  A hard, unbelieving heart can create an atmosphere in our life where we no longer seek the Lord with hope of finding.  We revert to trying to pay our own way, make our own way, and find our own way.  We lose sight of nothing being impossible for those who believe, and quit seeking.

In 2 Chronicles 20 we find Judah about to come under attack.  When the king hears of it, we are told that he fears but turns to seek the Lord.  He and the nation come together to seek the Lord and they seek until they hear.  Once they hear a word from the Lord, they step out toward their enemy much like Peter stepped out of the boat to walk to Jesus.  They marched down and found the word of the Lord to be true.  God had won the battle.  One might think that was their reward, but God did much more than they could ask or think.  He gave Judah the spoil which took three days to load.

There is much more to this story, but here is what I want to show.  They could have gone through the motions of a prayer for their safety as they went out to meet the enemy in their own understanding.  They could have gotten offended and said “Why us?”  “It’s not fair.”  “Why is this happening?”  They could have gone into prayer and fasting to impress and win the favor of God. What they did though was seek the Lord, period.  They reminded themselves of the promise, stated the problem, and stood before the Lord with eyes upon Him.  The faith that sought the Lord grew into a faith that heard the Lord, which then grew into a faith that obeyed the Lord.  They grew what God gave and He rewarded with victory and spoil.  What looked like the end, ended with blessing.

Using What Is Given

Matthew 25 has a parable Jesus told about the Kingdom of heaven.  It’s about three servants who receive talents from their master before he goes away.  Two of the servants multiplied what they receive and one buries what was received.  Upon the masters return, they are judged on what they did with what they were given.  Faith is given to seek the Lord and it will lead to greater faith to hear, follow, obey, and prosper.

David said, “One thing do I desire, that will I seek after.”  When we too seek first, all these other things are added.  Don’t circumvent your desire by trying to bring things to pass by your own strength and understanding.  Judah’s desire would have been to survive the battle, but they turned their hearts to seek the Lord.  He ended up being their reward and doing abundantly above all they could have thought or asked (Ephesians 3).

One thing pleases the Lord.  That is faith.  Faith is the currency of heaven and God has given you a measure to use.  It’s a belief that He is and that He is a rewarder of those who diligently seek Him.  Faith is what brings heaven into view.  Hebrews 11:3 says that by faith…what is seen was not made out of things which are visible.”  Faith is what brings the unseen realm of Heaven into view for the world to see. We must live by faith.  We must seek God so others may see not our greatness but His.