Deception about our identity causes us to live below our abilities.  Gideon and his people were being robbed.  When the angel of the Lord came to him, he was hiding in fear trying to hold on to the little he had left.  The fact that Gideon was living below his means, powerless, and in fear had no bearing on his true self.  How you and I live doesn’t change who we are.  It only reflects the amount of deception believed. 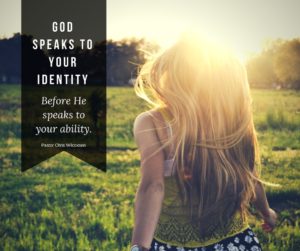 The angel of the Lord called out what God saw, not how Gideon was acting.  He said, “The Lord is with you, O valiant warrior” (Judges 6:12).  God spoke first to Gideon’s identity.  His began to shift from seeing himself alone to having God with him.  “God with him” revealed the valiant warrior that God had created.  It moved him from being powerless to being powerful.  The shifting beliefs about himself transformed him from playing defense with the little he had left to offensively taking back what had been stolen, his identity.

“Christ in us” is “God with us.”  We are not alone and He has not given us a spirit of fear, but of power, love, and a sound mind.  Let His presence conform you to the image of His Son.