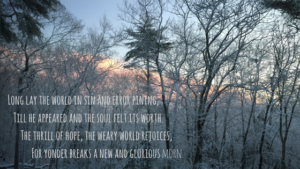 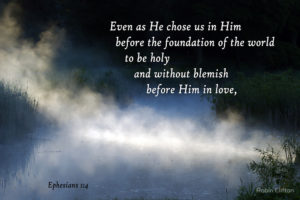 How often do you make a bigger deal out of your mistakes than needed? Nearly every day brings opportunity to beat ourselves up over something.  When we have those moments, our emotions can run off on us.  Unchecked they can lead us off the rails into major discouragement.  Generally speaking, we see these failures as harming to our present and future.  They can make us feel alone and hopeless.  ‘Big deals’ are just that – a big deal.  Of course, big deals work the other way as well.  Success, a major event, or special grace can be an enormous ‘big deal.’  These become huge boosts to our confidence. 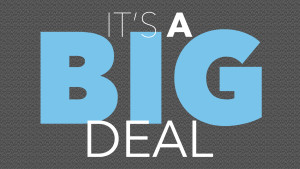 Sometimes we tend to muddy the water surrounding the events of our lives.  When we see our life as being totally up to us, the pressure can blur our vision.  Many can see every misstep as fatalistic.  Faith and fear work much the same way.  They connect us to what we believe.  Fear is always the product of over emphasizing something and making it a bigger deal than it really is.  Faith works the opposite.  It connects us to Jesus, who is a much bigger deal than anything you could do or have done.

The Bible tells us that ‘where sin abounds, grace does much more abound.’  Ephesians 2 says, “4 But God, being rich in mercy, because of His great love with which He loved us, 5 even when we were dead in our transgressions, made us alive together with Christ (by grace you have been saved), 6 and raised us up with Him, and seated us with Him in the heavenly places in Christ Jesus, 7 so that in the ages to come He might show the surpassing riches of His grace in kindness toward us in Christ Jesus.”  Grace is a ‘bigger deal than sin.’  What Jesus did on the cross is a bigger deal than your failures.  In the moment of sin, shortcoming, and failure, it will benefit us to remember this and have faith.  Jesus is a bigger deal in my life than what I just did or didn’t do.  Romans 8 tells us “we know that God causes all things to work together for good to those who love God, to those who are called according to His purpose.”

Have faith in God and connect to the “Big Deal” in your life.  Don’t let what you do steal your joy in what Jesus has done for you.  The big deal that trumps all other deals is this:  He will never leave you nor forsake you.  Like many in the Bible, you can be ‘a success, because the Lord is with you.’  That’s a big deal! 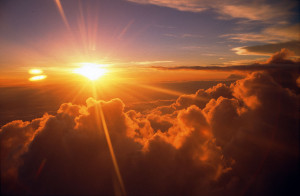 3 Blessed be the God and Father of our Lord Jesus Christ, who according to His great mercy has caused us to be born again to a living hope through the resurrection of Jesus Christ from the dead, 4 to obtain an inheritance which is imperishable and undefiled and will not fade away, reserved in heaven for you,5 who are protected by the power of God through faith for a salvation ready to be revealed in the last time.

To many, the Christian lifestyle, ideals, and thoughts have become archaic and irrelevant. Christianity, as a simple matter of lifestyle, will be short lived because it lacks the long term goal that makes it powerful.  As Paul said, “if in this life only we have hope, we are of all men most miserable.”  Many approach Christianity as only a way to better this life here on earth.  That is short term living without the long term reality Peter called a “living hope.”  Heaven and eternal life don’t seem real to many Christians.  It’s too unknown.  Therefore, decisions are made based on short sighted thinking.  Living a passionate and purposeful life require both the long and short term goals.

Peter declares that we have been rescued from aimless living.  It’s not about surviving today.  Literally, the old dead end life that we were confined to has passed away.  We are no longer held to the sad truth that this life is the best we could have.  (Even the worst existence here won’t compare to the horrors of hell.)  We are liberated to the powerful truth that the best is yet to come!  (Even if we had the best of existences here on earth, it won’t compare to heaven.)  Peter declares that we were born again to a living hope.  Hope is for something that hasn’t happened yet.  A living hope is a hope that hasn’t happened in its fullness yet, but affords us glimpses, experiences, and tastes of what’s to come.  That’s really good news.  This hope comes through the resurrection of the dead.  We too will rise again like Jesus, the firstborn from the dead, and enter into our inheritance that is imperishable and will not fade away.  God has reserved it for us and even now is protecting us by His power through our faith that we exert here on earth for a salvation ready to be revealed in the last time.  Do you see the long and short term goals?  The promise of God and the work of faith.

With our eyes on Jesus and our heavenly reward (long term), we live a life of faith (short term) here on earth.  That life of faith includes following Jesus, renewing our minds to His Word, and living a life of love.  As we do, we catch glimpses, we have experiences, and we taste of greater things to come.  We experience the Lord’s prayer, “Your kingdom come, Your will be done, on earth as it is in Heaven.”  This Easter don’t lose sight of the long term goal.  Continue to make short term faith goals in your walk with Christ.  Use your faith to love more, give more, and share Jesus with others more.  The just shall live by faith, which if we don’t shrink back will have great reward.